Note: This ARC was provided by NetGalley & Bold Strokes Books in exchange for an honest review. 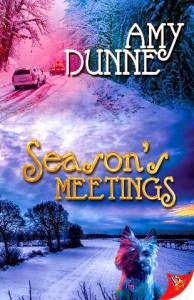 If you're looking for a heartwarming story about two women finding love during the holiday season, I found this novel to be a great fit.

Braving a winter storm in order to make the Christmas celebration with her closest friends, workaholic Catherine can't seem to catch a break.  With work causing her to miss her flight and future flights being cancelled, Catherine ends up having to resort to hitching a ride with a complete stranger in a vehicle one flat tire away from being salvaged. After attempting to make it through the storm despite warnings from weather officials and surrounding folk, the two end up losing control of the car, getting stuck in the cold before a good Samaritan sets them free.  They wait out the storm in a small Scottish town, all the while developing feelings for one another, as well as a furry addition to their odd group.  As you learn more about these characters and their connection to one another, the story begins to divulge into the nitty-gritty and show how it is possible for opposites to attract.

I thoroughly enjoyed the novel, especially as I was able to read it while in the holiday season.  At first, the characters seemed to be attributed to the specific components that make up type-cast characters, but as the story progressed, the character development for the main cast delved in to the more detailed peculiarities that became their signature associations.  The pace of the novel was steady, and I enjoyed how the author took the time to explain certain aspects in detail, such as the layout of certain settings and the emotions surrounding critical scenes.  Those details added to the associated flow of the novel, making it more realistic and visually pleasing.

I enjoyed each of the characters in their own way, most especially Holly, as she seemed to represent the more realistic qualities of a "normal" woman today.  I didn't enjoy Beth that much, as she seemed overly controlling, overbearing, closed-minded, and self-centered up until practically the last moment, where she has a moment of an epiphany and suddenly sees things as they should be.  Having her be the main character Catherine's best friend made me question Catherine's ability to pick quality people in her life.  As it's stated throughout the book, Beth has always been that way to Catherine, and I couldn't understand her tolerance of it.

The ending and epilogue of the novel seemed a little too cliché for my tastes, ending exactly as I predicted with certain attributes that didn't seem to fit the characters' personalities and ways of life.  Even though the epilogue did state that it took place 2.5 years after the end of the novel itself, it seemed a little too far-fetched that the women would already be in the particular situation they found themselves in, without more growth or development as people themselves.  Suddenly, they were the perfect couple, where I originally enjoyed the aspects of them that made them imperfect, and required the need to work on their relationship because it meant something to them to fight for their love.

All in all though, and despite the few grievances I have already mentioned, I did enjoy this book immensely. I finished it quickly (as opposed to my usual pace) and thoroughly appreciated the journey it took me on as I read it page after page.  I would recommend this book for anyone looking for a good holiday novel to keep you warm at night by the fire, as well as to anyone looking for a good way to pass some time with a light read and good story.

To pre-order and purchase the novel on Kindle, please follow the link below:

For other formats, please follow the link to Bold Strokes Books:
Season's Meetings by Amy Dunne


Don't have a Kindle?  Buy one from Amazon Here!